In 2014, Magen David Adom in Israel (MDA) facilitated a unique opportunity for final year undergraduate Paramedic Science students at Victoria University (VU) to engage in a clinical placement program as part of the developing relationship between these two organisations. This inaugural study tour attracted in excess of 80 applications from students, and this popularity has not declined in the years since. In 2016 VU marks the third study tour to be hosted by MDA in Israel.

Paramedic Science degree students at Victoria University undertake 360 hours of clinical placement during their course. Travelling to Israel and observing with the MDA paramedics is a unique and highly valued experience that has enhanced these students post graduate employment prospects, and provided them with lifetime memories and experiences.

Aside from observing on the MDA ambulances, VU paramedic students visited some of the world’s greatest historical and cultural sights including the Dead Sea, Masada, and the Old City of Jerusalem. Coupled with Israel’s many markets, beaches, restaurants and museums, the VU paramedic students on study tour come home with a wealth of learning and life experience from their time in Israel. Every student who has participated in this program has expressed a desire to return to Israel in the future. 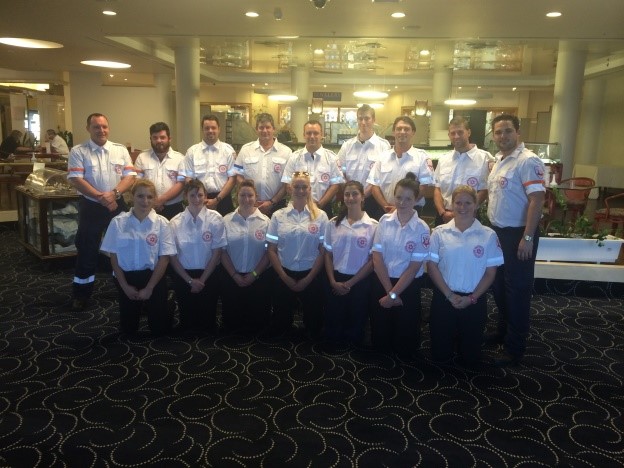 The 2014 experience:
The students were provided with a two day Mass Casualty Incident course by MDA, which was certificated on completion. This course provided a valuable insight into local management of national disaster and terrorism related incidents. The students participated in eleven observation shifts, each of eight hours duration (plus incidental overtime). These included day, afternoon and evening shifts. These shifts were undertaken at a total of six branch stations (three in Tel-Aviv and three in Jerusalem). The paramedic staff were welcoming and friendly, and our students were actively sought out to accompany operational crews even when rostered off duty. Our group was heartened by the professionalism of the MDA paramedics, treating patients of all race, nationality and religious affiliation according to their need and without prejudice.

The students were separated into two groups, one in Jerusalem and one in Tel-Aviv for their placements. Some 370 cases were attended by our students, including 23 cardiac arrest cases. One female student even met with the Israeli Prime Minister (Benjamin Netanyahu) as he visited the crew following a critical incident case that they had attended. 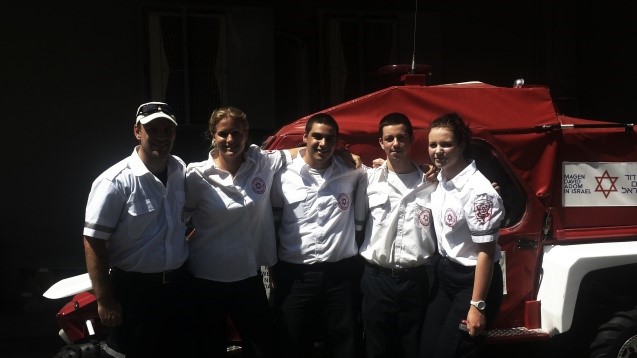 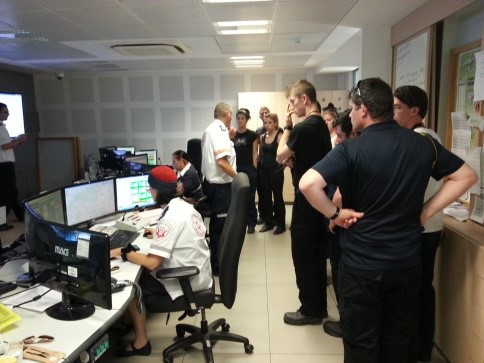 This tour was affected by the Gaza war of 2014, which evolved rapidly after we arrived in Israel. Our group witnessed incoming missile attacks from the Gaza region, resulting in air raid protocols being initiated nationally. All rockets in our area were intercepted and no additional risk or hazard was experienced by the students. We gained access early to an iPhone app that delivered a warning of imminent attack. This app is common in Israel, and was widely used. We found it to be a valuable tool for maintaining safety during our stay. This activity enabled the students to fully appreciate the nature of terrorism response, and MDA provided specific instruction for our party with regard to procedure during our initial induction training. It was somewhat interesting to participate in something that Australians have not witnessed since the Second World War, and yet something that is an inherent part of many societies today. This was indeed a unique perspective and one that greatly added to the overall experience. 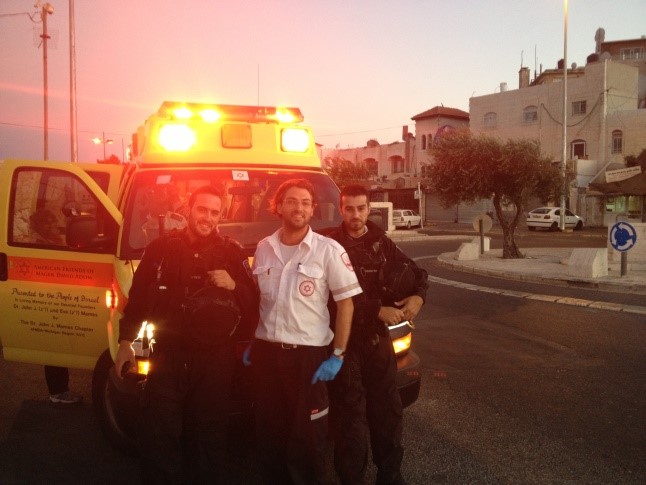 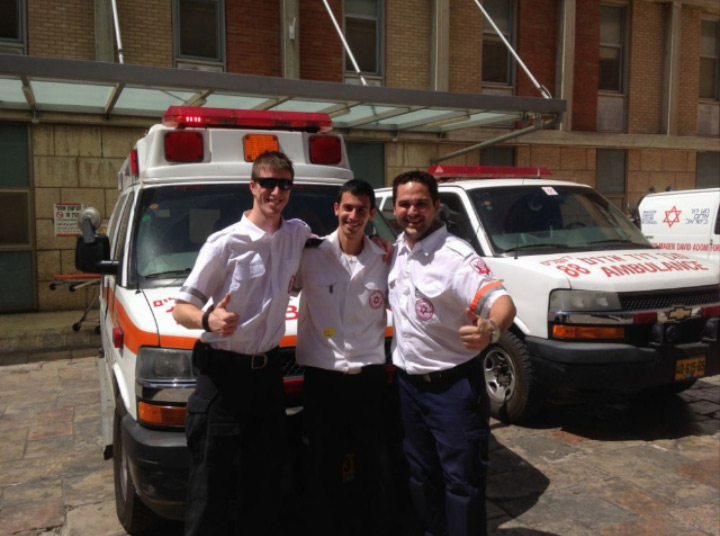 Student comments after the 2014 tour:
“All MDA staff were exceptional and at no time did I feel threatened by the conflict going on in Israel. It is a trip that I will recommend to every future VU paramedic student and one that I will never forget!”

“I would particularly like to mention a number of paramedics who I worked with. Nitay Bachana, Moshe Danenberg, Gabriel Aronovich and Gronin. These guys were all from the Tel Aviv branch and were extremely kind, welcoming, encouraging, and knowledgeable, and made me feel a part of their team. I would also like to mention Udi and Felix who provided us with anything and everything we needed. They were extremely welcoming and mad our stay and learning experience one I will never forget. This was a highly valuable tour and despite all that was going on, there were never moments I felt uncomfortable, unwelcome or unsafe. I would recommend applying for this tour to everyone.”

“The tour overall was a fantastic experience, and an amazing learning opportunity. I got to witness patients and procedures that I would rarely see in Australia, as well as have an amazing cultural experience. MDA and VU went out of their way to make sure we were comfortable and having the best possible learning experience.”

“The 2014 Israel Study tour was an incredible experience for myself both as a paramedic student and an individual. Our induction day, MCI course, 11 placement shifts and being overseas with my fellow classmates are all invaluable experiences that I will forever be grateful for having the opportunity to be a part of. As a student, I am appreciative for having the opportunity to witness emergency medicine in Israel’s pre-hospital setting, which given the situation the country was in at this time, was a one in a lifetime experience. MDA management, including Udi & Felix were incredible for accommodating all 15 of us with transport between cities and sightseeing, placement shifts, accommodation and ongoing support through our three weeks in country. I will be forever grateful for this one in a lifetime trip to Israel, where I have taken away invaluable memories in which I will be forever grateful for.” 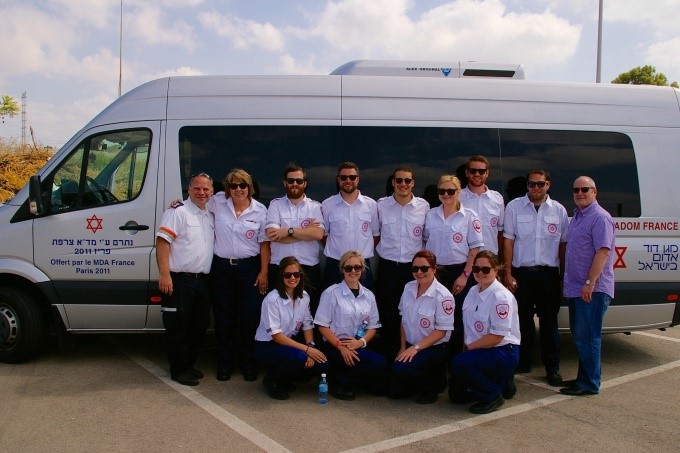 Each student experienced some 80 hours of clinical placement (800 hours in total) that included in excess of 270 patients attended during the 21 days in Israel. Students reported attending their first cardiac arrests, ballistic cases, paediatric cases and delivery of healthy baby.

The students were also able to demonstrate exceptional capability in the field and classroom, drawing positive feedback from senior personnel at MDA (and comment also regarding the high standard of VU students and their behaviours compared to other visiting groups ). This professional capability extended to the social situation, with many students developing firm friendships with the MDA paramedics with student being invited their homes for dinner on the Shabbat, invited to attend the individual paramedics synagogue, taken to their favourite eating places and introduced to the owners.

MDA provided transport for some aspects of the study tour, including arrival and departure from Ben Gurion Airport, and arranged tours to various historical sites.

Student comments after the 2015 tour:

“For me, my most memorable experience was my first day in Jerusalem, where a seemingly innocuous stroll through the market in the old city accidently lead me to the Church of the Holy Sepulchre, historically regarded as the site of Jesus Christs crucifixion and subsequent burial. Not being someone who regards himself as particularly religious, I was overwhelmed with the experience of being somewhere of such significance. Immediately following my arrival, a church service in Aramaic began, and made the whole scenario quite ethereal”.
“I have many memorable experiences from my time with MDA, some of those include: Entering a Palestinian Village with steep thin cobblestone lane ways during night shift, under military escort, to assist a patient suffering heart problems; The sight of 14 brothers from an orthodox Jewish family carrying their grandmother down three flights of stairs; Experiencing my first cardiac arrest, and four other subsequent arrests; Assisting in ETT intubation; Ventilating for the first time; Ventilating within the EtCo2 range for over an hour in a resuscitation theater; Using the trauma shears. Each and every job afforded me some insight I did not previously have”.

“My practice and understanding was not only enhanced while on shift with MDA, but was shaped even in my free time by being immersed in the culture and daily life of Israel. I would wholeheartedly advocate future students to participate in this program. It would also be beneficial to firmly emphasise to the students that they will feel overwhelmed and out of their comfort zone initially, but the original discomfort will emanate into wonderful exposure. The work and life experience I gained on this trip was monumental, and I will be ever grateful for being given the opportunity to participate in the MDA Israel Study Tour 2015, with Victoria University”.

All donations $2 or more are Tax Deductible Donate Now